Le Droit Humain is a mixed Masonic order that is active in over 60 countries, including the USA under the name “The International Order of Freemasonry, Le Droit Humain, American Federation”. Le Droit Humain originates in France in the late 19th century. In 1903 the first lodge (Alpha No. 301 of Charleroi Pennsylvania) was founded in the USA. More history about these early days here. LDH is not very big in the USA. Under half of the states have lodges, most states just one (with Florida as exception). Find out if there is a lodge near you by clicking here. A quick count results in 17 lodges and two triangles (correct me if I am wrong);

Eastern Order of International Co-Freemasonry. According to the Wikipedia article I linked to above, this order is one of the orders that was founded after 2001 when troubles arose within Le Droit Humain America. It has lodges in the USA and abroad.

Another version is that the order was founded in 2002 in Adyar, India as a split-off of Le Droit Humain. Their website says that:

AUM has lodges in Dallas (TX), Boulder (CO), N. San Diego County (CA), New York (NY), Ithaca (NY) and one more in the UK, two in Australia and one in New Zealand.

GWU is a North-American Freemasonic Obedience, with Lodges in the USA and Canada, practicing traditional liberal Freemasonry for men and women

The lodges are in Marin (Country, California?), San Fransicso (CA), Washington DC (use the links on the bottom of the GWU website) and somewhere in Canada. Late 2021 a triangle (lodge in the making) was formed in Half Moon Bay (CA).
This French Wikipedia refers to: Washington D.C., Chicago, Los Angeles, San Francisco and Canada (Montréal).

Unión Masónica Universal del Rito Moderno (or Universal Masonic Union of the Modern Rite / UMURM / UMUMR) was founded in Barcelona in 2008. The Union is active in Brazil, Colombia, Equador, Cuba and the USA (California and Georgia). Information on the world wide web does not say as much, but I was asured that the Union has mixed lodges.

For informattion in the English language, especially go to hedgemason.blogspot.com and look for UMURM, or just ‘google’ of course).

Grand Orient de France was founded in 1773. About a century later they got issues with “regular” Grand Lodges when the GOdF dropped the requirement for the belief in something Divine. The GOdF lost its regularity, but not its popularity. What is less known, is that in 2010 the GOdF decided to allow lodges to initiate women. Since then quite a few lodges have voted for this possibility, but not a whole lot initiated any women. According to the GOdF 1.319 women were initiated in 2013. That is not a whole lot against 49.000 members, but on a positive side, there are no less than 1.200 lodges that possibly initiate women; worldwide that is (mostly in France itself). In North America there are lodges in Washington, New York, San Francisco, Los Angelos, Baltimore and Florida. They may not all initiate women, but when you have a lodge near you, it cannot hurt to ask.

Women’s Lodges in the USA chartered by the Women’s Grand Lodge of Belgium (GLFB – WGLB), women only, three lodges in the USA (NY (Universalis), Washington (Emounah), LA (Aletheia)), starting in the early 1990’ies; 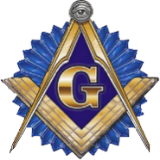 Women’s Grand Lodge of California, has three lodges (two in Marywood, one in Santa Monica) working in Spanish and English and working in the Ancient and Accepted Scotish Rite.

Honourable Fraternity of Ancient Freemasons, a women only order founded in 1913. There are 17 lodges in the UK, 1 in Romania, 2 in Spain, 1 in Gibraltar, one in India and 1 in the USA (Washington DC).

Non-Masonic, but affiliated organisations are active in the USA are the Order of the Eastern Star, the Order of the Amaranth, Ladies’ North American Shrine of North America and Heroines of Jericho / Order of the Cyrenes. All orders are meant for master Masons and their wives (and sometimes other relatives). See Wikipedia for more information.