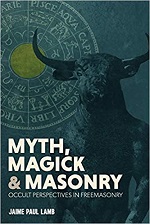 Since relatively speaking there just might be more co-Masons interested in esotericism, I have reviewed a book for you about “Myth, Magic & Masonry”.

The book was written by a Freemason who is also a member of the Ordo Templi Orientis and I understood the book would be about where the two systems touch. This is partly true.

The book has about 120 pages of text and actually contains four essays. In the first “section” the author writes about “The integral relationship between Freemasonry and Ceremonial Magick”. The other sections are about “Solar and astrological symbolism in Freemasonry”, “Elements of classical mythology in modern Freemasonry” and “Freemasonry and the rites of Mithras”.

Most contemporary Western magical orders somehow sprang from Freemasonry. In the time that esotericists and occultists alike joined Masonic lodges they also founded their own societies. Therefor it is not strange that within these orders many Masonic elements can be found. Where (a large part) of Freemasonry developed towards a moralistic society, some of the magic(k)al orders survive until the present day doing more or less what they did in the time of their foundings. The author gives an idea of what magical traces are left in Freemasonry and how a modern magician can look to Freemasonry. This may not be groundbreaking, but it is nice to read this from someone who still has his feet in both currents.

The astrology, Greek mythology and Mithras sections have a few nice findings here and there, but they are mostly not too much in depth and do not really give any new information. They can be better regarded as summaries of what can be found elsewhere and of course there is something to say for someone doing that.

Lamb presents a nice little book to read, but not not expect anything groundbreaking or in depth.