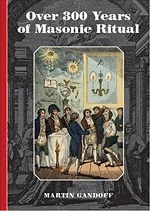 This book has nothing to do with mixed gender or women’s Freemasonry. Rather, it is a book about UGLE ritual. This review is for people with a general interest in Freemasonry.

The author has a fondness for rituals. He collects them and tries to visit as many different lodges as possible. Even though there is some sort of general ritual for English lodges working under the United Grand Lodge of England, there is a lot of variation. The reason for that is mostly historical and so Gandoff sets out to find the oldest rituals and trace the changes throughout the centuries.

The author starts his story way before the foundation of the “premiere Grand Lodge” in 1717. In fact, he starts with a general history of England to give some perspective to the rise of (speculative) Freemasonry. Then he writes about different periods, being: 1400-1620, 1620-1716, 1717-1730, 1751-1801, 1802-1718 and 1818 onwards.
Each period has its peculiarities. Of course in the older periods the author speaks about “operative” Masonry and searches for the rituals referred to in the Old Charges. Also the exposures get many pages, since they probably give the rituals of their own.
Gandoff also puts quite some stress on the troubled history of the “premiere Grand Lodge” with its rival Grand Lodge, the uniting of the “Antients” and the “Moderns” and what that did to the rituals and so on. He is not soft on the oddities and flaws of his own Grand Lodge either.

The books gives a nice overview of the development of the rituals, the differences and how these came to be. The author tries to do this in a loose writing style that I don’t always appreciate, but that doesn’t mean that I don’t like the book. It would have been nice had it been a bit more in depth, but I guess it’s meant to get you studying yourself.