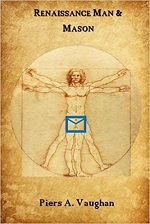 Somewhere I read that this author writes about Freemasonry and alchemy. When looking for such a title, I saw no such book. Among the titles of this author at Amazon, the present one seemed the most interesting.

“Renaissance Man and Mason” is a reference to the fact that the author has broad interests like the Renaissance ‘homo universalis’, at least, he is of the opinion that a Freemason should study further than just memorising the ritual.

The book is a collection of lectures that Vaughan gave during the course of many years and at different meetings. Some were addressed at lodges, others at public events. Most of them he gave more than once and here he presents the final version.

The subjects differ widely. The lectures go from (Masonic) history to things like Masonic meditation, spiritual healing, the symbolism of specific degrees and indeed “alchemy in Freemasonry”. The book seems to aim at a Masonic audience, because more than once knowledge of (for example) a certain degree seems required. He is quite explicit here and there. When some (ritual) text is already available on the world wide web, Vaughan does not shy to write about it in this public book.

Also interesting are Vaughan’s esoteric musings. He proves very keen on Kabbalah and to a somewhat lesser extent Alchemy. Both systems he projects on Freemasonry. Less interesting I find the lectures about Masonic meditation and spiritual healing.

Overall “Renaissance Man and Mason” a nice read. This is something quite different from the usual Masonic histories and it gives a nice peek into Freemasonry in the USA. The author was born and initiated in the UK, but has lived, and been a Mason in, the USA for 25 years and he travels a lot Masonically, so he has many comparisons and anecdotes to accompany his esoteric musing about Freemasonry.